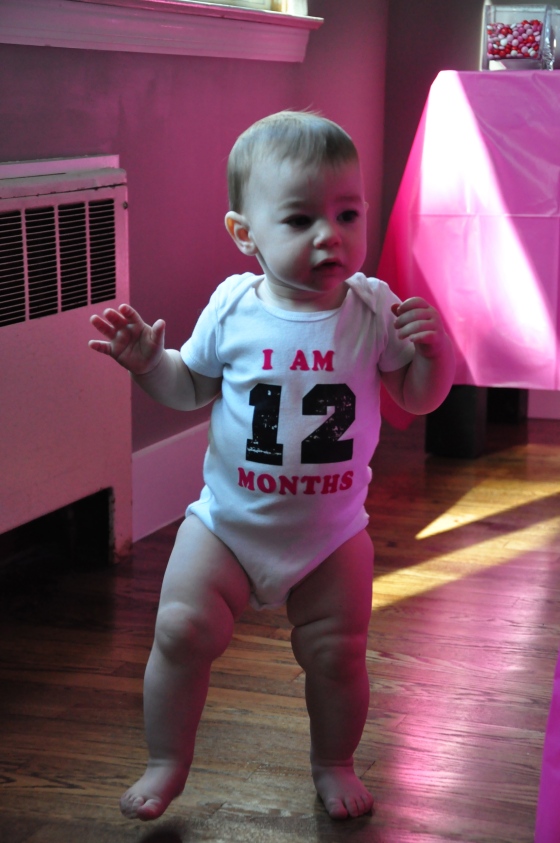 I think it is an unwritten rule that on the day of your party, you are a B*&@$!  At least, all the girls that I know are.  exceptmeimperfect.  The LKs were up until 2am on Saturday night preparing the house for this party.  We had help from Auntie S & Uncle P to move all the furniture out and bring the tables in….the house went from Living Room to Catering Hall in a matter of minutes.  It looked great! 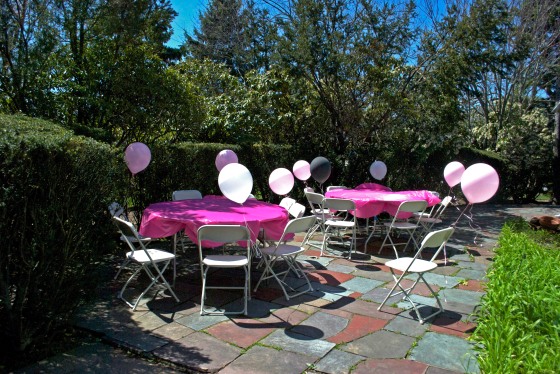 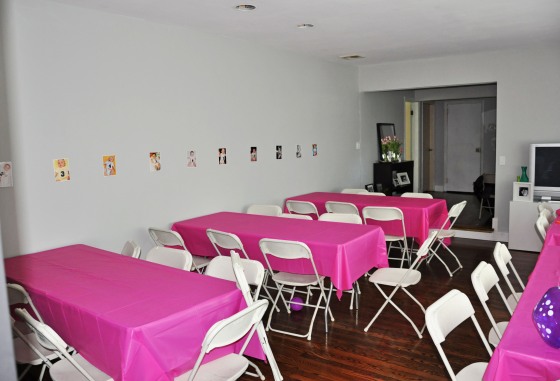 Then A woke up.  At 7am.  SCREAMING.  This is not her normal way to wake up, but it was the day of her party…so of COURSE she was cranky pants!

Our house held 85 people.  I can’t even believe it.  I know lots of guests thought it was crowded, mostly because it was, but it was crowded with all the people we love!

An amazingly talented friend came to the party & lucky for the LKs he brought his camera.  We didn’t expect him to work the party, but he seemed to be having fun capturing everything & who can argue…A is a pretty cute subject to photograph!

We kept the decoration simple since there would be so many people … I thought it would be too much with too many decorations!  We had some pretty flowers… 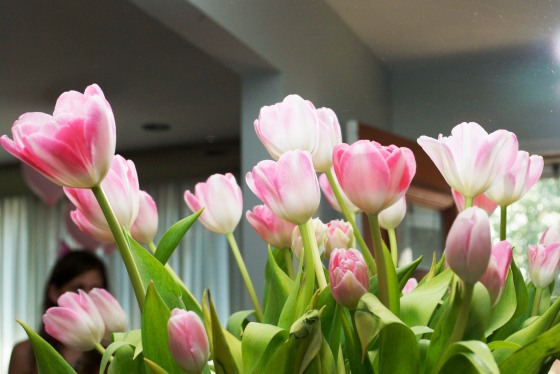 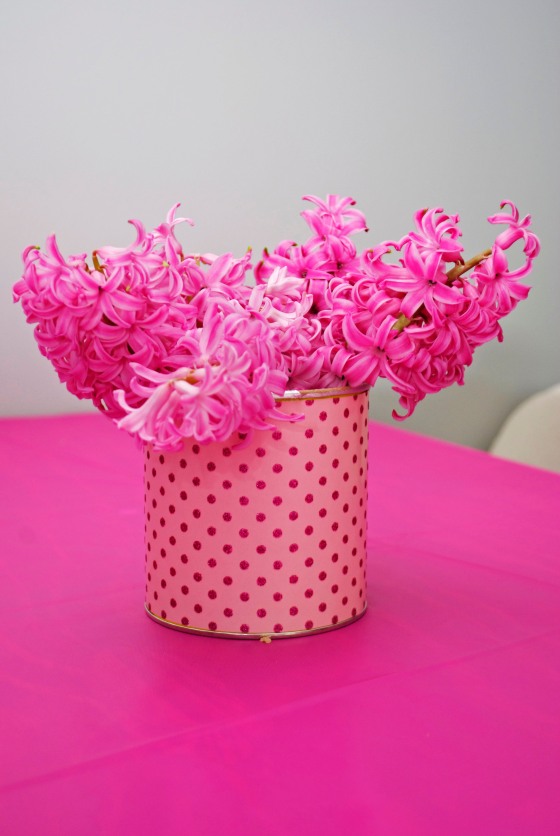 We had pink, black and white polka dot balloons too!  I almost got those beautiful perfectly round balloons – however those things are 36″ in diameter.  Each.  It would have taken 20, 15 minute car rides to get them blown up and to the house.  Have you seen gas prices?!  We went with regular balloons!

There are many benefits to having an April birthday.  (I prefer a May birthday myself but April has become a new favorite!)  One of these benefits was that I was able to walk with A outside from the time she came home from the hospital because the weather was perfect!  The other, was when shopping for her birthday party, I was able to have my pick of all things pink!  All the stores are stocked for Easter!  Since they start Easter decorations in about February…I had lots of time to get all the pink platters and serving pieces!

We catered bagels and fixings for the main part of the brunch, but the desserts were something I wanted to put a more personal touch on.  We had help though!  Not the same help that Auntie H got for S’s party…nowayinhell.  At the time of Cousin S’s party, I was pregnant with A and I promised my then unknown baby that when it came time for their 1st birthday, I would put more effort into their desserts than I did for my beautiful sweet niece.  I didn’t know if that was possible since my mom and I put about 20 hours worth of effort into S’s party stuff!

For A’s party we had lots of help!  Our friends E, R & PD came with a fabulous cake for A to get her hands into!

Aunt D brought her famous mini-cupcakes in polka dot liners with pink icing!  She is an ah-mazing cupcake decorator if you need one.  I know mine are simple, but that is what I asked for.  She made some awesome Easter cupcakes recently which I will show on here soon!  Shameless plug for my bestie and her talents!

Finally, I made A’s cake.  It took me about 3 hours total.  I was inspired by 2 photos of cakes I had seen.  1 is this rainbow cake which has been seen all over the place. 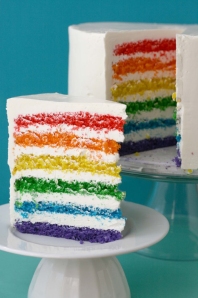 The 2nd was this M&M decorated cake.

I was going to make 2 cakes, but once the guest list topped 80, I decided I should prepare in other ways and combined my inspirations into 1 (i think) perfect cake!

The best part of this cake by far was that it was sitting nice and pretty on our dessert table, waiting patiently for us to sing the Happy Birthday to A, and I was taking a moment before gathering everyone to sit with my family…and in walks a cousin….with a plate….with the cake…already cut…WHATHUHHOWWHEN?????OK time to sing…NOW!

Another decoration that I insisted on doing myself is this Birthday banner.  My A needed some handmade-ness in her party & I was determined to give it to her… 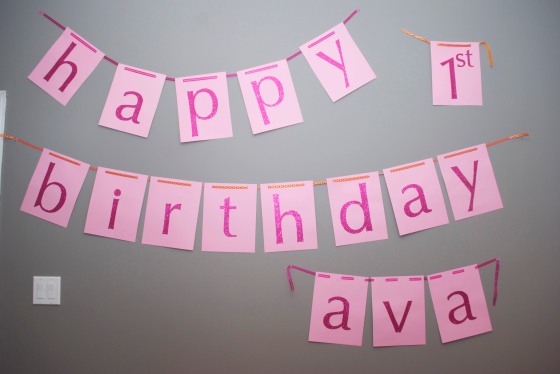 The only other decoration I used was A!  I hung her monthly photos along the wall next to the tables in the living room, and I put up a few of her 1 year photos from the photo shoot she did up by the drink table!  Ugh I love this kid!

The weather was our major worry leading up to the party…but as it turned out, all the rain came and went just in time!  We were able to have a great party inside AND outside!  Our guests were certainly the best part of the party!  I didn’t get to spend much time with any one person, but I hope everyone there had fun!

Auntie S getting some good snuggle time with Baby A2

Cousins CM & RM! All the way from PA! They seem to be having fun!

Boston friends came too! So happy they enjoyed the outdoors!

They really made a pretty picnic on our lawn!!! Love it 🙂

We got Auntie S2 to come from MD with my bun...

A having some special Uncle C time 🙂 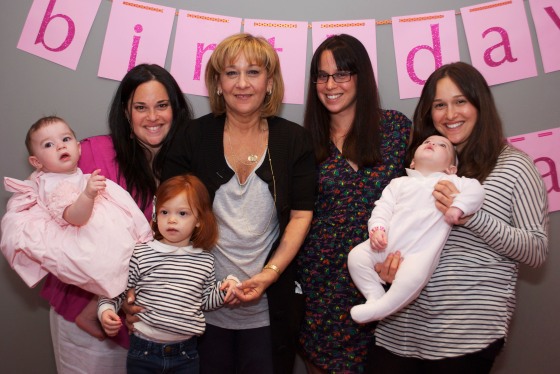 Before the party ended, we had to get an all girls shot. GIRLS RULE BOYS DROOL!

A’s birthday was so special.  A had her screaming moments, she didn’t have great naps that day, but overall she was so good.  As usual when she didn’t see me she was on her best behavior, but I was so proud of her for being such a good girl & sharing all her toys with the other kids, smiling for the camera, and being my sweet girl!  I can’t believe she’s 1.  She is talking up a storm now which keeps me laughing.  She has such an opinion on everything!  I can’t wait for the new adventures we will go on during this next year and the next 100! gw

Thank you everyone who came to her party & shared in her special day.

Special thanks to Aunt D’s date.  Without you G, no one would have eaten, drank, had lemons, or pretty much anything else!!!  So thankful!