This past weekend the LKs, A & Auntie E took a little trip to Chicago to visit our family…Aunt G, Uncle L, Cousins J & B.

We started off the trip on Friday night where I thought I was GENIUS and decided we should all take the 8pm flight because A would take her last bottle at takeoff, then fall peacefully asleep in my arms for the whole flight!

How it really happened…A gets on the plane, freaks out because she’s starving.  We feed her before takeoff, give her some motrin for her ears and she then climbs like a maniac over me, Auntie E and Daddy until we takeoff.  Whoever said motrin or tylenol puts kids to sleep was not talking about my monster.  Its like A’s speed….we won’t be taking that ever again!  As we takeoff, the plane gets loud & A’s head drops like dead weight on my shoulder.  Auntie E and I look at each other and think…YES…SUCCESS…10 seconds later.  POP, up is A.  What a faker!  She was a good girl, this was not the screaming crying annoying kid to other passengers.  Just the pain in my @$$ crawling, overtired, can’t get situated daughter bothering our row of family!  Just before our final descent, she falls soundly asleep…ON THE TRAY TABLE.  Ever flown anywhere?????  Yea – now we have to move her.  Fab.  Thankfully she stayed asleep.  And that was the last sleep we saw all weekend!  More on that in a later post!  This post is about how amazing our trip was!

We ate more than a person should eat ever, laughed so hard we cried, played lots of games and overall had a fantastic weekend.

Here’s some of our weekend in photos.

Cousin B & A...she apparently wanted to make sure his nose was real! 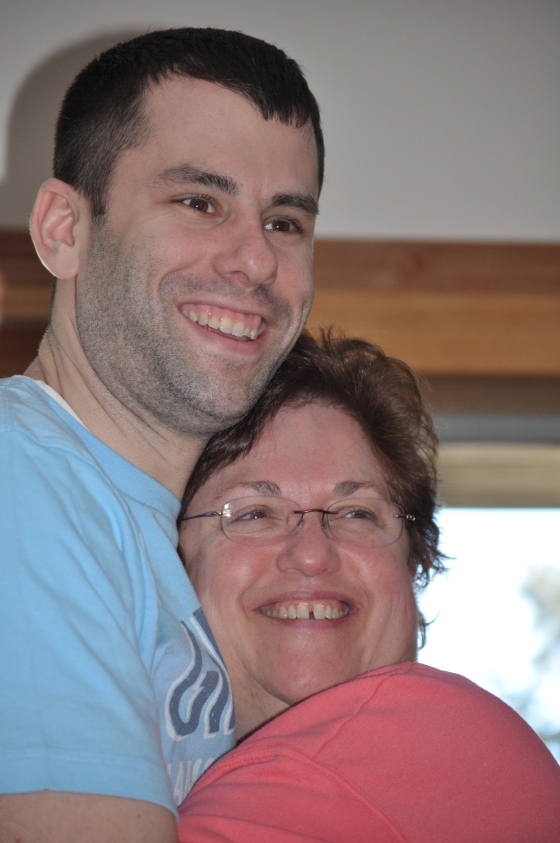 First...A kicked Cousin B's head....later that night, Mommy kicked his butt in Just Dance 2! That is all I'm saying to prevent a video of said butt kicking from ending up online!

Aunt G throwing A up in the air!!!

Daddy & Cousin B doin' it up Bollywood style!

A taking in the view from waaayyyy up high on Daddy's head!

A enjoys playing on the Daddy jungle gym! 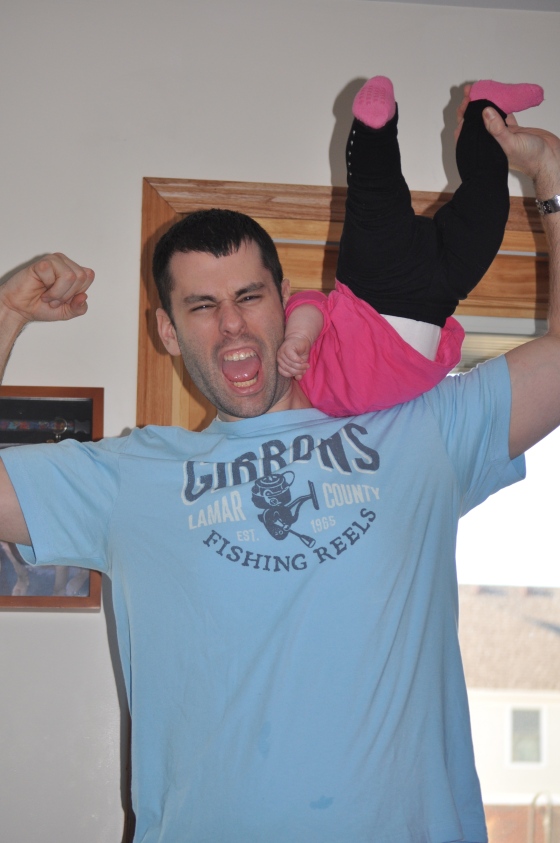 Another fun activity we did was go to the Kohl Children’s Museum with Cousin B, Auntie E, Daddy, Mommy & A.  This was a beautiful museum.  Very very busy on this holiday weekend, but it was very clean and there was a ton of things for kids to do.  A is a little young for most of the exhibits, but it was pretty cool.  They had 4 areas for 18 months and under, they were all padded little areas with lots of toys and mirrors and things for the babies to play with.  A had fun! 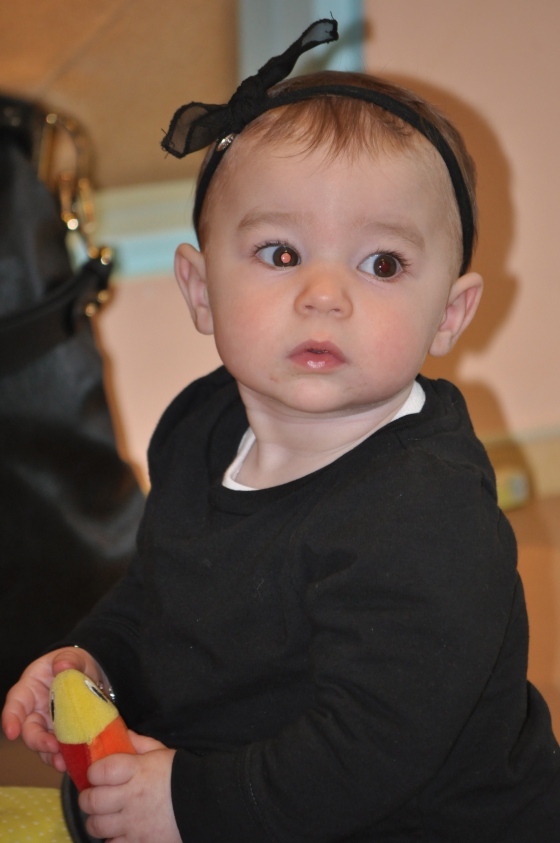 This was birth control for Auntie E…even though many little children confused her for a kid herself.  Understandable because this is what her hands look like!

We had a great weekend…even if A didn’t sleep a wink, and the plane rides were full of an antsy A who wanted to crawl up and down the aisle and up on all the strangers to see what was going on, this family is awesome and they were so hospitable.  They made this trip very memorable!  I don’t have any pics of Uncle L, but we’ll get some next time.  He wasn’t feeling so well, but we’re happy we got him to laugh a lot!  And he kicked everyone’s butt in Wii skiball.  He did amazing.  He’s the only one who beat “Megatron”‘s Wii top scores…something we will all be practicing until next time!!!!

Top 10 things I learned in Chicago 🙂

10.  Auntie E should never choose her own nail polish

6.  I should never play Lets Dance with long pants on…I will almost kill myself!

5.  Uncle L is a master at Wii skiiball

4.  Motrin makes A insanely hyper & unless there’s a high fever involved, she will not be getting any of that ever again

3.  I miss T a lot when I travel…that doesn’t change when you have a baby

1.  Our Chicago family is awesome 🙂