Well, remember hurricane pear tree debacle that was this & this?  Well we can add the following to the end of that story…

Mister LK pulling up the stump

The boys actually got that thing out with the combination of a chain saw, a jigsaw & a jeep!  They felt very cool to be able to use the jeep to pull the stump up and out!  I can’t wait to get the Mister on the project of a new trex deck out there (with a wading pool)!!!!

Then we took a little rest & went over to J&D’s house to play, have a BBQ & watch football.  The kids had a blast!

Remember when I said yesterday that Miss A loves her a good hoola hoop?!  Well she was practicing overtime at her cousin’s house! 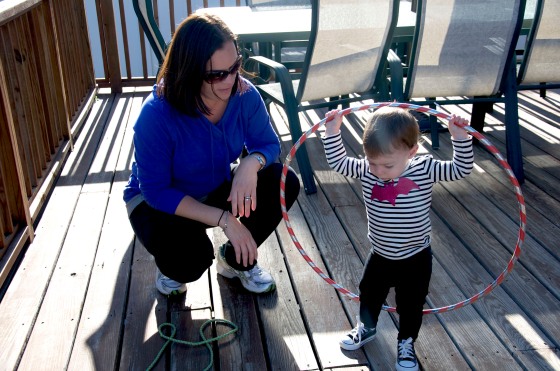 Then she moved on to the jump-rope!

Little M had other ideas for fun activities that afternoon!Like riding his Daddy's shoulders!And sweeping!

He also thought it was a good time to check out some 3D stuff in his cool glasses!

The babies weren’t the only ones having fun that day!  The bigger kids found fun things to do too!  The girls enjoyed their afternoon making “chalk dust”…which I’d never seen done before.

Yup!  The dog!  *Don’t worry – no animals were harmed in the making of this fun day!*  We didn’t let them paint the dog with chalk…and we didn’t let the dog paint herself either!

Mr. IP thought it would be fun to be an attack child… 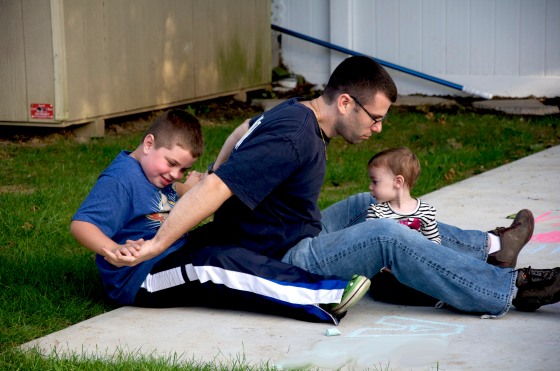 Or maybe he was pretending he was on a row-boat….who knows!  He obviously thought it was funny.

This day also marked my little girl’s very first 20 minute temper tantrum.  For the day she looks back on these posts to see her “firsts” I’d like to point out that this tantrum was over a Capri Sun.  I don’t really give A juice ever.  She drinks water like it’s going out of style & she eats like a champ so I just don’t see the need for juice…but the big kids were having Capri Sun & A wanted one…BAD…we had to leave the table & sit inside for 20 minutes until she calmed down…then we had to hide the juice packs when she came back out!  Fun times A…thanks.

We came inside after dinner & got into PJs & had some dessert!  It is all about moderation…and since I saved her from having pure sugar for dinner, I gave her some cupcake! 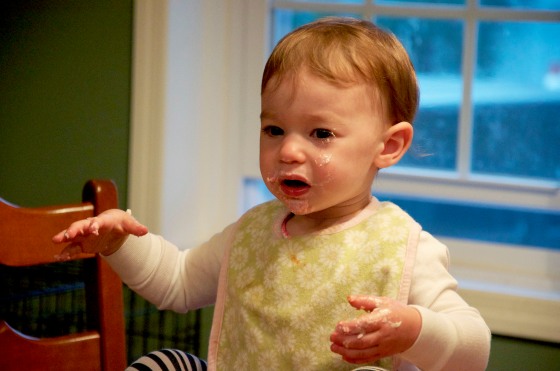 Not that most of it got in her belly – more like her eye!

For the adults, AG & I made an ooey gooey chocolate chip skillet cookie!  Super easy to make and really delish!

By the end of the night the little ones were exhausted & A thought she’d help her mommy out after getting sort of cleaned up … probably giving me a hint that she’d appreciate me stopping to take pictures about now!

Thanks to the P family for such a fun day!  We’re looking forward to picking apples/pumpkins with you guys this weekend!!!

One thought on “Sunday Funday…with a chainsaw, 5 kids, 2 dogs, 6 adults, some football, a BBQ & a skillet cookie!”