In our last house, I was SO on top of A’s nursery.  It was all decorated once she got into her big baby crib & out of her bassinet.  I made art and framed it and hung it as soon as I could.  In this house….it was kind of enough just to get her bedding on, rug down, and paper shades up!

I started to need more decor in there…let her know we love her and want her to have a pretty pretty room!

I ordered some tissue paper pompoms from Etsy, which in retrospect was idiotic.  I could SO have made these…with NO trouble.  I didn’t though, so I waited until they came in the mail, which they did on Friday & happily I had our friend N over to help us!  She fluffed the pompoms & she did all the knot tying!  Then LK2 came home & we taped those suckers up to the ceiling.  I’m not sure scotch tape was the best way to hang them, since I know they will need some more securing sooner than later, but its working ok so far.  The room needs A LOT more in terms of art hanging and mirrors and girly things like my plans to customize her curtains…but this is the pompoms for now!  Its a little bit difficult to see because of the stupid zoom…but hopefully soon I’ll be able to take some better photos!

Daddy hanging up A's pompoms with some tape! 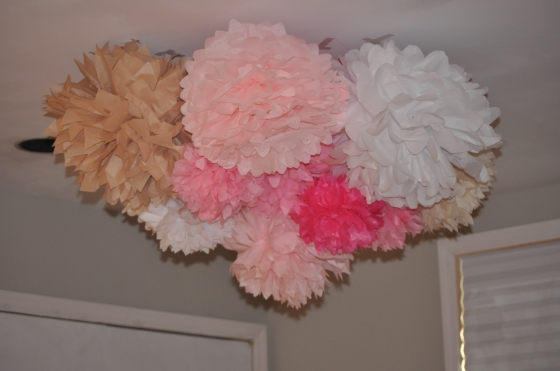 We’re going to get on top of making some pompoms for A’s bday party!  not paying someone else to make them!

2 thoughts on “Getting our butts on A’s room decor!”